We don’t need to but we do it anyway

We don’t need to but we do it anyway

In the planning of Manchester Union brewery I was already working in beer, it’s a full time job so we were planning the brewery in the evenings, I did what I could to keep weekends free for my wife and I to spend time together which was mostly spent walking or enjoying a meal together or sharing a beer or glass of wine. I’ve always loved the food and drink industry and obviously that spills over into my private life.

Having been in and around the ‘street food revolution’ since 2011 the principals of low & slow are certainly not lost on me. Like the lip smacking and tail wagging that goes on when my Irish Terrier Flynn sees cheese or bacon, I’m left transfixed, giddy, salivating, by the sights and smells of a slow cooked smoked beef brisket. I’ve always loved BBQ’s, I love cooking full stop, but a while back, with raised eyebrows from Emma (my wife), I finally welcomed delivery of a huge smoker for our garden. “How often are you going to use that?” came the immediate question, a question I afforded myself the luxury of deeming rhetorical as I cheerfully got to assembling the rig with excitement growing, already deliberating which beer to pair with the inaugural meal. “Why do you need that, you already have a BBQ?” my wife persisted. This question demanded serious attention, I just blew the value of a small European city break on something you could easily argue we don’t need. Just how bad would it be to settle for flame grilled rump on the BBQ instead of a slow cooked and smoked brisket? I searched for an answer that would explain all in a totally rational and justifiable way, it was all so clear in my head so if I could just deliver that well there could be no come back. Still half focused on the instruction leaflet that had more pages than my patience could handle I ‘explained’ … “I know we don’t need it but I want it’. The air grew cold and I was promptly left on my own with the object that I was increasingly concerned about not even being able to assemble correctly.

At around the same time as this we were talking to various brewery manufacturers about building our brewhouse. Not one company or representative in the UK that we were talking to could offer us the kit we wanted to make. In the 3 years we had to plan the brewery I spent hours talking with Ian who heads up the brewing side in our partnership to discuss the way we would brew and how that changed the brewhouse we needed. Ian was unshakable in his commitment to decoction mash brewing. Ian would explain that a normal brewery would step mash, raising the temperature in a number of stages from around 40 degrees up to around 77 degrees. Ian planned to use decoction mash techniques which involved taking a proportion of the mash (grains and all) to a different tank and bring that to the boil for a set time. At 100 degrees you get the Maillard reaction which is a chemical reaction between amino acids and reducing sugars which gives browned food its disctintive flavour, think seared steaks and toasted marshmallows. This adds a slight caramelisation to the beer and also a small but pleasing amount of tannins however the biggest thing we garner from this is the big silky mouthfeel you get from the melanoidin release. Some German lager brewers would get big mouthfeel by adding specific types of malt but these can deliver a higher percieved sweetness in the beer and proper pilsner should be dry. Some people dispute the need to use a decoction process, it was primarily introduced to get the best malt extract from poor quality malt so with great malt nowadays do we really need it?

The by-product from this old method was the melanoidin and tannin release that couldn’t be replicated any other way and for us in search of body and mouthfeel as well as flavour and dryness this was the only way we wanted to brew. This took us to the Czech republic looking at brewhouses followed by searches in Hungary, Canada and China. I remember one particular conversation with a UK representative of a brewery manufacturer in Canada who was growing frustrated that we wanted something he couldn’t deliver, his frustrations turned to anger, manifested in condescendence, “YOU DON’T NEED TO DO THIS IAN”. Ian’s reply was as resolute and simple as ever, “I know we don’t have to but we want to” This guy was never going to get it but that’s ok, not everyone is going to pick up our beer and think ‘big body but still dry, how’d they do that?’ to many people the complexities of our beer will be overlooked while it lubricates conversations rather being the conversation and we’re really happy that’s the case but it’s really important to us otherwise we’d just be producing average beer like the big corporates and we want something we’re proud of. 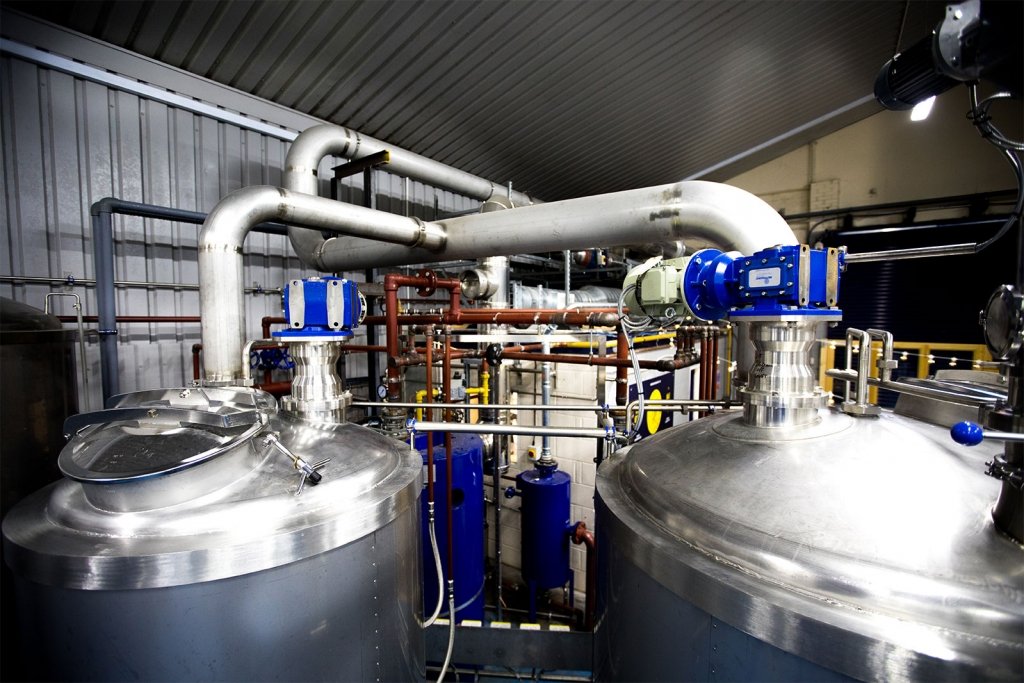 When we finally found a UK brewery manufacturer with enough engineering curiosity to make the brewery we wanted Ian got set to work producing our first batch. We think the process we use makes a better pilsner, big on body and flavour but still dry and refreshing. I also think my smoked beef brisket tastes infinitely better than any rare steak I flame grill on the BBQ, maybe it’s the time and effort that goes into preparing it or maybe it’s the understanding of the balance between the flavour imparted by the smoke when it has fully penetrated the meat and the lengthy process which breaks connective
tissue containing collagen into gelatine to increase succulence. Either way, my wife embraces the smoker now as she is a huge fan of my smoked beef brisket, she also loves washing it down with a cold pint of Manchester Union lager. I think back to the rep from that Canadian brewery manufacturer who says ‘you don’t need to do this’, what would he say about my brisket? Maybe the same until he tries it, we don’t NEED to do anything but if it adds to our enjoyment we should do it anyway.