Raise A Glass: A Nod To Our Friends And Stockists | Bräuhaus

Raise A Glass: A Nod To Our Friends And Stockists | Bräuhaus 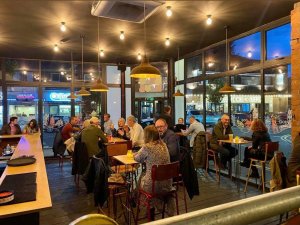 Taking its name from the German word for 'brewery', Urmston’s Bräuhaus is a venue absolutely devoted to supplying the beer enthusiasts of Northern England with, you guessed it, only the finest imported flavours of Bavaria - be it cold, frothy lager or mouthwatering plates of food.

First opening its doors as the UK emerged from the pandemic, back in 2021, the relatively new bar and restaurant venture has rapidly become one of the buzziest and most endorsed places of hospitality among the locals of the leafy satellite suburb, the inner city day-trippers, and those travelling from outside of the Greater Manchester area.

Joining the ranks of an ever-growing list of alluring cocktail bars and dining rooms, independent cafes and bakehouses, in what was once a quiet farming town turned thriving commuter hotspot, the Deutsch-themed locale brings even more diversity and choice to Manchester’s already thriving outskirts.

Managed by the same team behind the now sadly defunct Mexican bar, El Camino and lauded chicken diner, Get Chucked, which still operates for delivery and collection from the bar, Brahuas offers its own indulgent menu stocked with taste bud tantalising German goodies through breakfast, lunch and dinner time service hours. 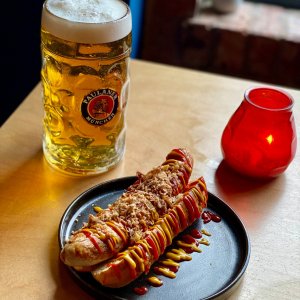 From currywurst and wieners to pretzels, traditional stews, or Rindergulasch, and Schnitzels, there’s a vast assortment of authentic dishes to savour, with an even greater list of accompanying natural wines, cocktails and some of the world’s best craft lagers also up for the testing - Manchester Union Lager included (We might be Manchester by name but we’re Central European by brewing methods and by taste. Fact).

When the kitchen eventually closes late in the evening, the bar changes its hat once more, transforming into a superb space fit for socialising and dancing with friends and family, way into the small hours. Events at the venue are always varied with takeovers from some of Manchester’s finest DJ talents at the weekly Haus Music party, spinning the best cuts in Northern Soul, Motown, R&B and more, as well as periodical occasions celebrating Christmas, New Year’s Eve and, probably most importantly, Oktoberfest. We highly recommend attending Bräuhaus for their annual Oktoberfest soiree, should you be in the neighbourhood in the autumn.

Situated just a stone's throw from Urmston Train Station on Flixton Road, Bräuhaus is easily accessible from the nearby city centre with trains frequently leaving from Manchester Piccadilly and Manchester Oxford Road throughout the day. Taking a little over twenty minutes in journey time, here’s the perfect excuse to get out and explore Manchester’s lively fringes.

Experience the many delectable delights of Bavaria at Bräuhaus without ever having to leave the country. No passport required.

Cookies are very small text files that are stored on your computer when you visit a website. We use cookies for a variety of purposes and to enhance your online experience on our website. You can decline certain types of cookies by unchecking them below and clicking 'update settings'. You can also remove any cookies already stored on your computer by clicking here. Please keep in mind that unchecking or deleting cookies may prevent you from using parts of our website.

These are cookies that are required for the operation of our website details of which can be found here.

These cookies are used to collect information to analyze the traffic to our website and how visitors are using our website. For example, these cookies may track things such as how long you spend on the website or the pages you visit which helps us to understand how we can improve our website site for you. The information collected through these tracking and performance cookies do not identify any individual visitor.