Raise A Glass: A Nod To Our Friends And Stockists | Cooper Hall

Raise A Glass: A Nod To Our Friends And Stockists | Cooper Hall 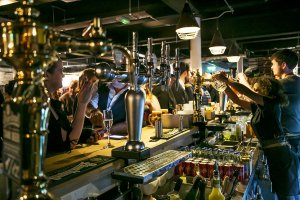 From the cultured visionaries behind Manchester’s NoHo Group, proprietors of some of the Northern Quarter's quirkiest and most frequented social hangout spots, the likes of Dusk ‘til Pawn and Wood & Co, comes Cooper Hall.

Housed within the basement floor of the architecturally striking Sevendale House, a recently regenerated Grade II listed building occupying the entire block enclosed by Dale Street, Lever Street, Stevenson Square and Spear Street, the venue is a favourite among beer lovers and merrymakers in the city, seeking quality entertainment and even better refreshments. 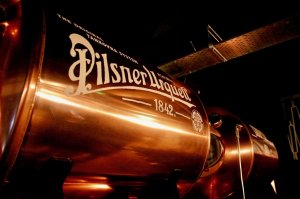 Taking over the space where the Copacabana salsa bar was once found and eventually opening under the new moniker back in 2016, the vast 300-capacity alehouse is arguably the largest in the trendy district, boasting original features from its former industrial past. Its dimly lit and moody interior makes for a very intimate and atmospheric experience, with the attention of its patrons being drawn to the expansive glimmering bar and huge brass Pilsner tanks affixed to the ground nearby.

High wooden tables and bar stools, reminiscent of those found in traditional beer halls across the European continent, scatter the bar's spacious floor space, whilst a compact stage area acts as a second focal point for guests during the weekends. An eclectic programme of local DJs and groups can regularly be seen and heard here, spinning everything from disco and house classics and paying tribute to some of Manchester’s biggest names. 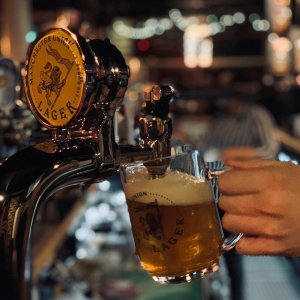 Upon finding your desired spot to sit and socialise, your second port of call should be the aforementioned alluring bar. Here you’ll find a well-stocked menu of both alcoholic and non-alcoholic beverages to wet your whistle. From decadent cocktails and an assortment of fine whiskeys and craft gins to a wealth of IPAs, stouts and lagers lovingly produced by some of the area’s best breweries - Manchester Union included. There’s plenty to have a go at with something to suit all tastes. And if said drinks begin to make your head spin, there’s also a well-priced menu of street food to take advantage of. Grab a quick bar snack such as a pretzel or go for something a little more indulgent and fill your belly with one of Cooper Hall’s signature hot dogs.

Providing something for everybody, not just beer lovers or humans for that matter, dogs are welcome too, Cooper Hall is, without doubt, one of the city’s best spots to catch up with friends and pets over a sublime beverage. And with closing times usually running later than 2 am during the weekends, it’s also a place to party long into the night, should the mood take you.

Cookies are very small text files that are stored on your computer when you visit a website. We use cookies for a variety of purposes and to enhance your online experience on our website. You can decline certain types of cookies by unchecking them below and clicking 'update settings'. You can also remove any cookies already stored on your computer by clicking here. Please keep in mind that unchecking or deleting cookies may prevent you from using parts of our website.

These are cookies that are required for the operation of our website details of which can be found here.

These cookies are used to collect information to analyze the traffic to our website and how visitors are using our website. For example, these cookies may track things such as how long you spend on the website or the pages you visit which helps us to understand how we can improve our website site for you. The information collected through these tracking and performance cookies do not identify any individual visitor.